I saw this on a blog I subscribe to bradrobertben and I just had to repost:

THE LEGALITY OF MARRIAGE

02) Gay marriage will encourage people to be gay, in the same way that hanging around tall people will make you tall.

03) Legalizing gay marriage will open the door to all kinds of crazy behavior. People may even wish to marry their pets because a dog has legal standing and can sign a marriage contract.

04) Straight marriage has been around a long time and hasn’t changed at all like many of the principles on which this great country was founded; women are still property, blacks still can’t marry whites, and divorce is still illegal. 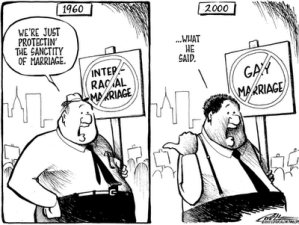 05) Straight marriage will be less meaningful if gay marriage were allowed; the sanctity of marriages like Britney Spears’ 55-hour just-for-fun marriage would be destroyed.

06) Straight marriages are valid because they produce children. Gay couples, infertile couples, and old people shouldn’t be allowed to marry because our orphanages aren’t full yet, and the world needs more children.

08) Gay marriage is not supported by religion. In a theocracy like ours, the values of one religion are imposed on the entire country. That’s why we have only one religion in America.

09) Children can never succeed without a male and a female role model at home. That’s why we as a society expressly forbid single parents to raise children.

10) Gay marriage will change the foundation of society; we could never adapt to new social norms. Just like we haven’t adapted to cars, the service-sector economy, or longer life spans.